Fight back against a growing AI occupation and wreak havoc in their castles to claim exclusive prizes before March 26 in our latest Tourney.

Sire, it’s time for a killing spree! Too long, The Wolf and his henchmen have been settling in our parishes and spreading terror amongst our villagers. Instead of simply crumbling their castles, let us send a clear message: Any AI soldier that dares set foot in our territory will be slain without mercy! Kill as many AI troops as you can to win big prizes in the newest Tourney: 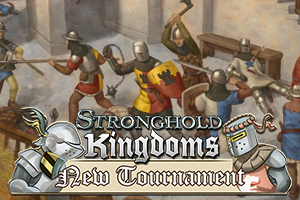 Min Prize Requirement: 500 AI troops killed
Please Note: Your ‘AI Extermination’ Tourney score is determined by the number of troops killed while attacking AI castles, i.e., The Rat, The Snake, The Pig, The Wolf, Paladin Castles and Treasure Castles. Troops killed in attacks on Wolf Lairs and Bandit Camps do not count towards your score.

What is a Tourney?
Tourneys are limited-time contests in which players across all game worlds (not including special worlds such as Rise of the Wolf) compete in various in-game PvE activities for fame and in-game loot. Each Tourney is focussed on a different area of gameplay, so there’s a Tourney for everyone whether you’re a farmer, trader, diplomat or warlord!

I’m just a Bumpkin… How can I compete with a Prince?
You won’t have to! To guarantee everyone a fair chance at earning prizes, players are divided into three separate leaderboards during each Tourney. Your leaderboard is dictated by player rank, with prizes scaling as you rank up and advance to new leaderboards. If you rank up across one of the following boundaries during a Tourney your score will be transferred to the new leaderboard:

How do I enter a Tourney?
That’s the easiest part of all! There is no button to press, invitation to accept or Gods to appease, as you simply log in and play Stronghold Kingdoms as normal. Once you take an action related to the current Tourney (e.g. Kill attacking troops in ‘Come Get Some!’) you are automatically entered into that Tourney and added to the leaderboard.

Can I compete in Tourneys on the go?
Fantastic question, Sire. As you may have heard Stronghold Kingdoms is now available on both and Android and iOS, letting you rise through the ranks wherever you are!