The more eagle-eyed players may have noticed a new golden laurel wreath icon at the top of the Stronghold Kingdoms UI… We are excited to reveal this is for our new ‘Tourney’ system! This new gameplay update will allow players to compete in a series of medieval tournaments for special prizes and bragging rights on all-new leaderboards. Starting with the first tourney scheduled for 3pm (Game Time) on October 31st, players will regularly compete in a wide range of contests changing as often as every few weeks. 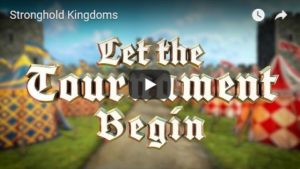 Medieval ‘Tourneys’ will soon take place across all game worlds as limited-time events, with various PvE challenges designed to test players’ mastery over different areas of the game. New leaderboards and tiers also offer those at different skill levels unique challenges and loot based on their rank. Tournament objectives will eventually cover all areas of Stronghold Kingdoms gameplay including economy, trade, military, exploration and religion. Which skill will be YOUR ticket to eternal fame and glory?

To find out more about the Tournaments update please visit the new ‘Tourney’ page on the official Stronghold Kingdoms Wiki.

Stay tuned for the official release next week!