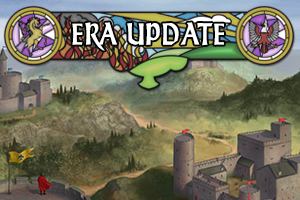 Increased opportunities for small Lords to flourish, greater balance in the political landscape and new strategic challenges for veteran warlords. These were our goals with the gameplay changes made during our transition to the newer Era system and today we continue to refine the Era rule set. Implementing your most requested changes surfaced in the official Kingdoms forum and on social media, today’s Era Worlds Update is a direct response to your feedback.

Lords and Ladies who reign over their kingdom from a Mac have received a completely new client and user interface! Based on the iOS version of Stronghold Kingdoms, the new Mac version offers a slick design, intuitive menus and much faster implementation of future updates to the game!

We would like to thank all the players who have made this update possible by sharing their thoughts, feedback and suggestions on our official Stronghold Kingdoms forum. Rest assured we have much more planned for you this year including Global Realm 3, Europe 5 and more. Prepare to explore new worlds, wage war across new world types and check out the upcoming Events System! You’ll need the practice, Sire. As some say our greatest nemesis could be plotting his return…