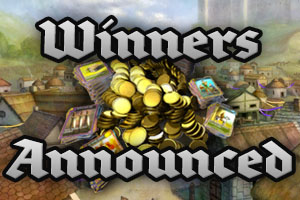 Are you one of 50 lucky players to receive mighty prizes in the Europe 4 Launch Giveaway? Here are the winners!

Congratulations to the following winners:

The winners have been picked at random from the pool of participants of our Facebook Giveaway and have been rewarded with the prizes:

Do you smell that, Sire? That milord is the scent of a new world, of untouched lands and brave blood just waiting to be spilled on virgin battlegrounds. The 33 countries of Europe 4 are in need of a strong King or ruthless Queen. Will YOU be cunning enough to build a historic empire from scratch and take your rightful place on the throne? Might you even be the first Era world monarch? With Europe 4 and the larger Era update, which will apply to all future game worlds, we are replacing the old Age system and improving on core gameplay mechanics throughout the game.

Based on feedback from Lords and Ladies that have battled through the Ages, some even progressing to the Final Age and choosing to end their game world, Ages will be replaced with Eras on future worlds. While similar in structure to Ages, with a total of seven Eras that change with the end of each Glory Race, new Eras will bring forth a fresh change of pace while leaving the political landscape untouched. The new Era system is set to improve the late game experience for battle hardened veterans and novice players alike.

Learn more about the Era update on our official Stronghold Kingdoms Wiki.

Europe 4 also introduces the following PvP changes, most of which are aimed at finely tuning the early gameplay experience for the established Lords and Ladies of Stronghold Kingdoms:
• Monk abilities used in war and politics begin unlocking at Rank 10 (Thane).
• Players have a Faith Point cap, which increases with each new rank.
• Players are only able to participate in capital elections once they reach Rank 8 (Freeman).
• The village of a player ranked Freeman or below cannot be razed, only captured.
• Razing is limited to players Rank 22 (Prince) and above.
• The cost of razing players ranked below your current level has been increased significantly.

Discuss the changes with fellow players on the forum.

Europe 4 is designed to pave the way for a better, more welcoming game to be enjoyed by established desktop players and new mobile users. Will you adapt to the new strategic landscape and rise to the top or instead watch as the masters of Stronghold Kingdoms burn your pathetic attempt at an empire to the ground?

There’s only one way to find out… Join Europe 4 now!