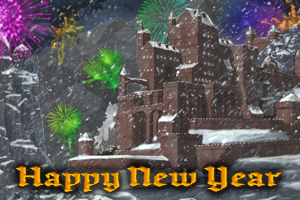 Can you believe it, Sire? Another year has passed and we are about to enter a new era in Stronghold Kingdoms. This calls for celebration! Not only for what you have experienced and achieved in 2016, but also for what is coming in the near future. You and your allies have bravely battled the Wolf on hostile new grounds, sailed the stormy seas of Island Warfare and even taken full control over the future of your Kingdom by closing down iconic siege grounds. We raise our cups to you!

One of the most requested features of 2016 is soon coming to a Stronghold Kingdoms world near you! Well, all Kingdoms worlds, actually. Expanding on Quests and Achievements, a new contest system will feature regular, short term challenges that pit all players of a world head to head in a race for prizes. Covering all gameplay aspects of Stronghold Kingdoms, this will be your chance to shine as either the fiercest warlord, craziest forager or most diligent farmer of the day! More information will follow prior to launch later this month.

Stronghold Kingdoms for iOS and Android has been thoroughly tested and vetted by a select few Lords and Ladies and is now eagerly awaiting to be unleashed unto the phones of player all around the world. With only a few tests and touch-ups to go, we are happy to announce that the days before release are numbered and soon you too will be able to defend your castle and lay siege to enemies wherever you go! Where will you take your Kingdom? Which new countries will you conquer on your journeys?

Pre-register now and boost your mobile adventure with a free Baron Beginner’s Bundle!

The future of Stronghold Kingdoms isn’t written in the stars, it is written in your feedback! Based on the ideas and requests brought to us through the forum, Facebook, Twitter and mails, we have put together a rich list of new features to present in 2017. Start planning where you’d like to move your Town Hall, prepare to mark enemies and allies with a wider range of diplomatic relations, stay better informed about your vassals and much more! Still got an idea or request you’d like to see in the game? Share it with us and the community for a chance to be part of Stronghold Kingdoms’ evolution.

For the first time in Kingdoms’ history, players have taken full control over the fate of their worlds by entering the Final Age. With some worlds closing their gates forever and rewarding those that have fought bravely during its lifetime, we are looking forward to opening up new opportunities for fame and glory. Alongside fresh worlds of existing maps, 2017 will introduce completely new territories and special worlds with their own unique gameplay experiences.

We wish all Lords and Ladies a great start into this new year and we look forward to bringing even more excitement, joy and battle ferocity to your Stronghold Kingdoms experience in 2017. May the journey begin!